Sometimes people can find the most valuable friendships in the most improbable places and with the most unlikely people. This couldn’t be truer for Big Sister Suszanne. Her special relationship with a young boy began when she was at a meeting for the Newcastle Lions Club, and staff from Big Brothers & Sisters of Clarington did a presentation about the In-School Mentoring Program. It sparked her interest in becoming involved with the agency and soon after, that’s just what she did.

“I felt like it was something I should be doing,” she says.

In 2005, she decided to begin volunteering with Big Brothers & Sisters of Clarington as an in-school mentor and was placed at Orono Public School with a little boy named Nathan.

The two hit it off right away and enjoyed doing things together like crafts, origami, building model airplanes, playing by the creek and spending time with other kids and their in-school mentors.

Suszanne says that she felt a special connection with Nathan because his dad had just passed away, and she had lost her father when she was just 11 years old.

“I knew what he was going through. My brother was Nathan’s age when our father died and I knew what a tough time he had.”

The pair developed a true bond and eventually decided that they wanted to continue with their friendship outside of school hours. Suszanne approached BBSC to inquire about changing her match from an in-school match to a traditional one-on-one match. But there was a problem; there had never been an inter-gender match through BBSC before. Traditionally, young boys had been matched with males and young girls had been matched with females.

Suszanne arranged to have this issue addressed by BBSC’s Board of Directors, and the decision was made to move forward with the match. Suszanne and Nathan were free to spend as much time together as they wished.

This switch was just what they needed, and Suszanne and Nathan became closer than ever. Before Suszanne came into Nathan’s life, he had very few friends and frequently felt lonely.

“Suszanne made me feel like I had someone to trust… other than my mom,” he said. “She’s another person I consider family.”

Nathan, who is now 12, is happy he was able to get a Big Sister instead of a Big Brother. He feels that he and Suszanne share a lot of the same interests that he may not have found in a Big Brother.

“I’m not really into sports,” he says.

The two of them like doing things such as glow-in-the-dark golf and going to the movies. Suszanne said that being involved in this program gives her something to look forward to.

“It’s a shame that more people don’t understand the value of this program to a child,” she says. “It makes me happy to be able to make a difference in someone’s life.”

Suszanne explained to Nathan that when the time comes where he is less interested in spending time with her, and would rather spend time with his friends, that that’s okay.

“I understand that kids grow up and eventually want to spend most of their time with friends,” she says. “I have kids of my own and I understand how it works.”

“But that won’t happen,” Nathan interrupts. “You’ll always be my friend.” 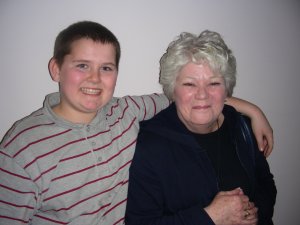